“What We Are Fighting For” – Eleanor Roosevelt -During World War II – Performance, presented by Susan Marie Frontczak 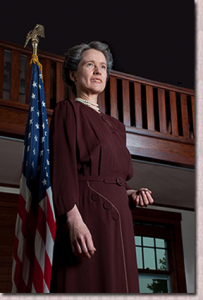 War is a controversial topic. The stakes are particularly high if you have been working for world peace for over twenty years and your husband is the president of the United States while your country is embroiled in the largest war the planet has ever known. How does one stay true to one’s ideals in the midst of war’s mayhem? How can we build the world we want while surrounded by tumult?

It is December 1942. Mrs. Franklin D. Roosevelt has just returned from England where she visited with soldiers, generals, royalty, and the working people. Find out how the First Lady feels about the individual’s role in a world torn by war, hardship, and uncertainty.

The program includes a monologue in character, followed first by a “conversation with Mrs. Roosevelt” and then a Q&A with the scholar/ presenter, Susan Marie Frontczak.

More about “What We Are Fighting For” – Eleanor Roosevelt -During World War II – Performance, presented by Susan Marie Frontczak